The History of Dalkey, Dublin 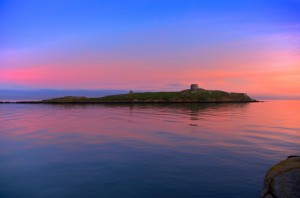 Dalkey’s story begins on Dalkey Island some six and a half thousand years ago. It is from the island that mainland Dalkey got its name. The old Irish name for the island was Deilg Inis meaning Thorn Island. This was changed to Dalk-Ei by the Vikings and later anglicised to the familiar Dalkey. The mainland also became known as Dalkey.

Through the fifth and sixth centuries the north end of Dalkey Island was the location of a promontory fort and in that fort the remains of amphorae (wine containers), glass wares and bronze pins and clasps have been found. In some instances these goods were produced locally but some were imported from as far away as Greece, North Africa and the Dalmatian cost, off Croatia.

In the seventh century by which time Christianity flourished in all parts of Ireland, a saintcalled  Begnet (Becnat) is associated with this area.  Becnat’s churches in Dalkey were therefore thought to be subject to the monastery in Glendalough. The Early Christian Church on Dalkey Island was founded in 700 AD and there may have been a foundation on the Island from the 600s.

In the early 900s we find that the Vikings have moved, after their defeat in Dublin, to re-group on Dalkey Island. They are doing a roaring trade in slaves and are using the Island as a holding place for their unfortunate prisoners. A hoard of Viking coins found in Victorian times in Castle St Dalkey have the head of the King Edgar who ruled from nine fifty nine until nine seventy five. (They are now in the British Museum). 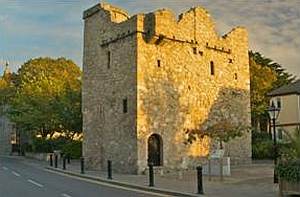 Mainland:  At this time too there was development of the area which we now call Dalkey town. The church on Castle Street is 10th century (now in ruins and part of Dalkey Castle & Heritage Centre. (There was thought to be a wooden church on this site before this stone church was built). The Chancel, the Chancel Arch and the Belfry were added in the 13th century.

The Belfry is a twin belfry.  It housed two bells. It appears that there was a way of climbing up to strike the bell by hand. The chancel window is a 16th century addition.

The arrival of the Anglo Normans to Ireland in 1169 and their rise to power in Dublin one year later did much to shape the social and political landscape, and by the end of the twelfth century the influence of the Norman influx in Dalkey was widely evident.

Due to poor anchorage in the port of Dublin, Dalkey continued to thrive. Large ships, unable to navigate the shallow and treacherous Liffey could anchor in the deep waters of Dalkey Sound where the ships were lightened. The heavy cargo was removed to be transported overland to the city or by shallow shell boats that were able to deliver the precious loads deep into Dublin.

Dalkey owes much of its layout to the merchants who carted their valuable cargoes up from the sea shore until transport could be arranged.

In 1358 Dalkey rose to prominence after the Dublin Merchants succeeded in an application to the Crown to use the deep and sheltered waters of Dalkey Sound to off- load goods bound for Dublin. Seven fortified town houses- locally referred to as castles- were built to store the goods.

The Seven Castles of Dalkey 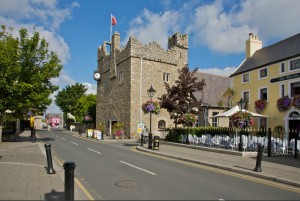 The 7 castles of Dalkey were called:

Dalkey became a fortified settlement, protecting the townspeople from marauding attack by the riotous O’Byrne and O’Toole clans from deep within Wicklow.

Goat Castle which is today part of Dalkey Castle & Heritage Centre is one of the seven castles of Dalkey. The name was given to it by an Anglo-Norman merchant family, the Cheevers, who were associated with the castle in the 17th century. You can see its defensive features to this day: Machicolation, Murder Hole & Battlements.

There is a fine example of  a barrel vaulted ceiling in the Foyer.

Dalkey had its own urban administration. The upstairs room of Dalkey Castle was used by the Dalkey Town Commissioners. The fireplaces were ‘Victorianised’ at this time as was the Garderobe. One of the medieval fireplaces has been revealed in the reconstruction of 1998. 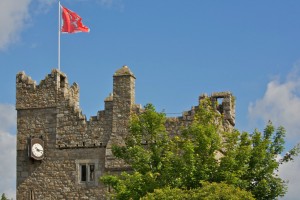 Market 1482: Dalkey was granted a licence to hold a weekly market on a Tuesday in 1482, possibly to regularise an existing market. There was an Annual Fair on the feast of St Begnet on 12th November. The shopkeepers in the town had to close their shops and set up stalls outside the town and pay a tax to the Archbishop of Dublin who used this money for the upkeep of the walls and pathways. (This was referred to as murage and pavage).

Daily Life:  As well as attack from the hills, the problem of smuggling was rife in the area for some time. In fact, things got so serious that a water bailiff was commissioned for the area to ensure that only the right cargoes were being removed from the ships and that the right taxes were paid.

As Ringsend and Dublin docks and the port were developed, through the later fifteen hundreds and through the sixteen hundreds, the town of Dalkey became unimportant to the merchants who had so needed it and the town slipped further into decline. By1630, St Begnet’s Church here was reported to be abandoned and roofless. Dalkey reverted to a sleepy fishing village. 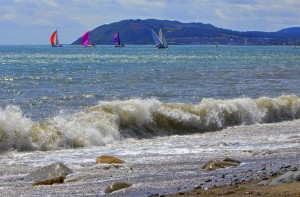 Martello Towers (1804-1805):  in 1793 England found itself at war with Napoleon. Later in 1804, fearing an invasion, a string of 26 fortified towers, called Martello Towers after Cape Martella in Corsica were built along the east coast from Balbriggan to Bray. A Signal Tower was constructed on Dalkey Hill as a means of communication between the towers.

November 19th 1807 was tragic day in the area’s history. Several ships left Dublin carrying troops bound for the Napoleonic war. The next day, two ships, The Rochdale HMS Prince of Wales, having been caught in gale force winds and heavy snow were lost. The bodies were washed up for weeks afterwards along the shore. A number are buried here in St Begnet’s Graveyard.

The loss of almost all of the four hundred lives on board was a catalyst for the building of the Dunleary (Dun Laoghaire) harbour, (Asylum Harbour) which began in 1817.

The stone was transported to site from the Dalkey Quarry by the ingenious Funicular Railway, a self-powering transportation system relying on the weight of rock being moved down the hill to return the empty carts back up. 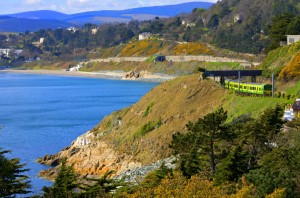 This was a busy and exciting time in Dalkey’s history. Many new people came to live in the area to work in the Quarry. They were also very tough times as there was no social welfare system and when lives or limbs were lost and there were on-going battles for meager compensation.

In 1834 the arrival of the railway connection to Kingstown (Dún Laoghaire) and later in 1844 the Atmospheric Railway to Dalkey led to an influx of grand new Victorian residences. People could now live in the suburbs and take the sea air and work in the city.

So Dalkey has an ancient, rich, varied and important historical background. Today you can imagine what it was like to live in Tudor times by visiting Dalkey Castle & Heritage Centre. Open daily except on Tuesdays. Visit www.dalkeycastle.com